WDL is managed and consulted by a highly experienced leadership team that shares the collective vision of building the brand as a leader in the Indian QSR industry. The leaders bring experience and insights across functions including strategy, operations, finance and QSR. 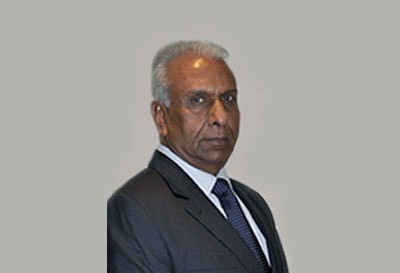 Mr. B. L. Jatia has over 45 years of experience in paper, textiles, chemicals, food processing, mining, hospitality, healthcare, investments and finance and retail sectors. Mr. B. L. Jatia is currently the Managing Director of Hardcastle & Waud Mfg. Co. Ltd. The company is engaged in trading / manufacturing of chemical products. Besides, he also holds directorships n a number of other companies and is a trustee ofa charitable trust. Mr. B. L. Jatia holds B.Com and LLBdegrees from the University of Mumbai. 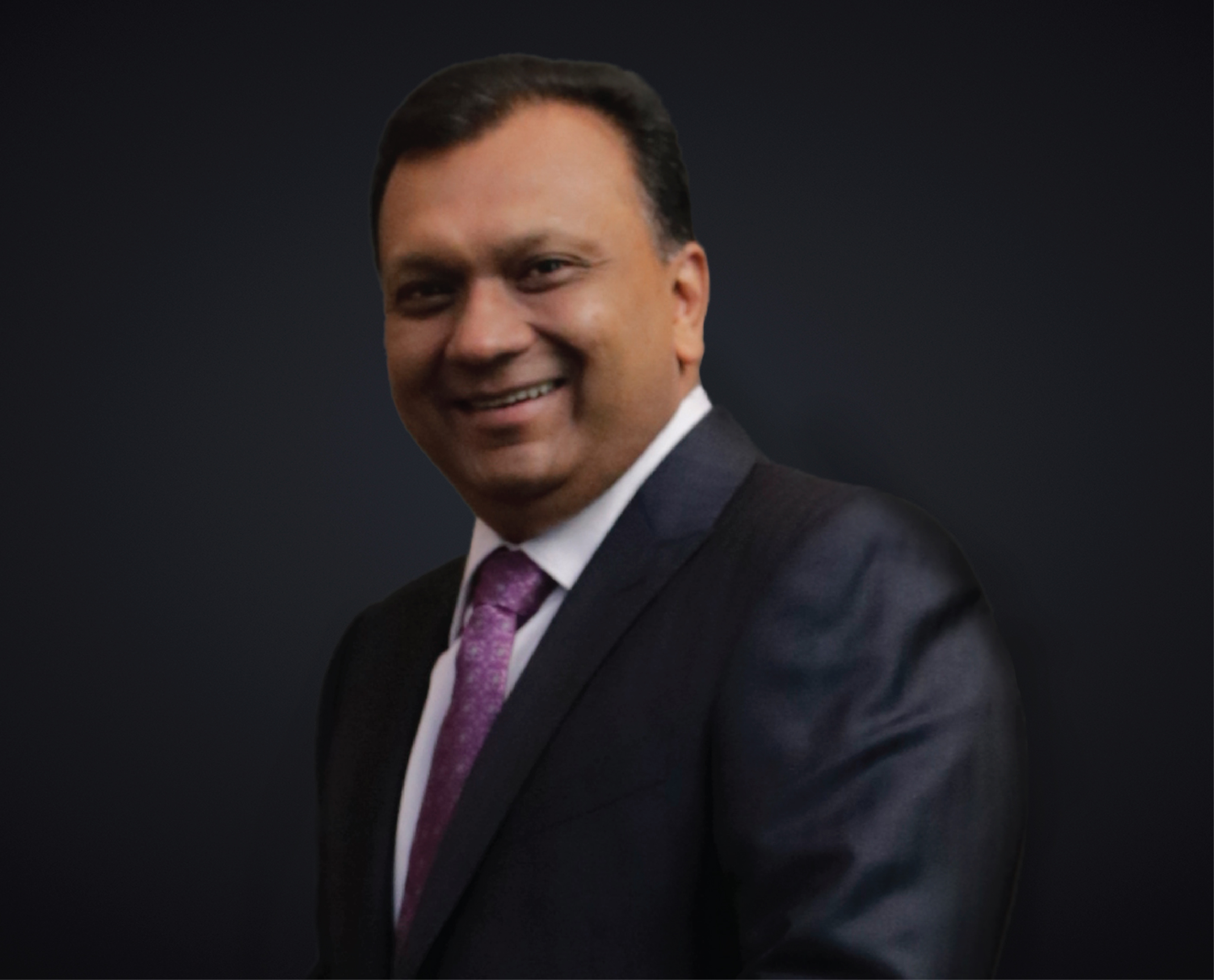 Mr. Amit Jatia has over 26 years of experience in the QSR industry. As Vice-Chairman of Westlife Development Ltd., he has been responsible for all aspects of the establishment and operation of McDonald’s restaurants in western and southern India, including site location and acquisition, site development and equipment installation, supply chain management, product development and marketing strategy, among others. He has been recognised for his achievements with the ‘Young Achievers Award’, bestowed by the Indo- American Society in 2003, Business World’s ‘Most Respected Company’ award for the Food Sector in 2005, for the third consecutive year,
as well as Images ‘Retailer of the Year’ award in 2004 and 2005. He holds a B.Sc in Business Administration (Finance) from the University of Southern California. He has completed programmes on Management Control Systems at the Indian Institute of Management and on strategy, leadership and governance at Harvard Business School.
Read More 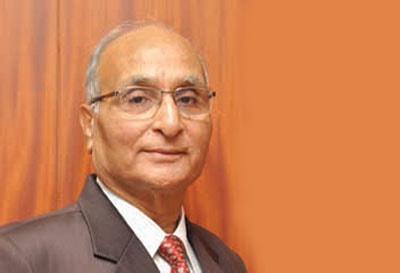 Mr. P.R. Barpande was an audit partner with Deloitte Haskins & Sells, Chartered Accountants, Mumbai and has retired after practising for more than 30 years. He has wide experience of serving the domestic and international clients such as Reliance, Mafatlal, Lupin, Mahindra, Hexaware, Jet Airways, John Deere, Bridgestone and Tech Mahindra etc as an audit partner. He was actively involved in reformatting accounts to US GAAP / IFRS for major domestic and multinational companies and some Indian banks. He is a Fellow of the Institute of Chartered Accountants of India. He is an Independent Director in some of the listed and private companies.

Amisha Jain, CEO of Zivame, is extremely passionate about building innovation-led consumer centric brands. She is now leading the fastest growing women's organization for intimate wear and is all set to catapult the business to greater heights. She is a firm believer of “One Team, One Voice”. And this has been her foundation to build teams that are all individually strong and collectively effective at delivering business results.
An alumna of INSEAD and McKinsey, she has over 16 years of experience in technology, consumer and retail sectors. Prior to joining Zivame, Amisha was heading the Arvind Sports Lifestyle business and the Digital Centre of Excellence for the Arvind Group. Through the course of her career, she has been leading the growth and transformation initiatives for multinational consumer goods, and apparel brands. During her stint as the Head of Sales at Nike, she was also chosen for the prestigious ‘40 under 40: India’s Hottest Business Leaders 2015’ and ‘India Inc’srising women business leaders 2015’ award by the Economic Times & Spencer Stuart, respectively. In her spare time, she enjoys reading and camping with her husband and her three-year-old son.
Read More 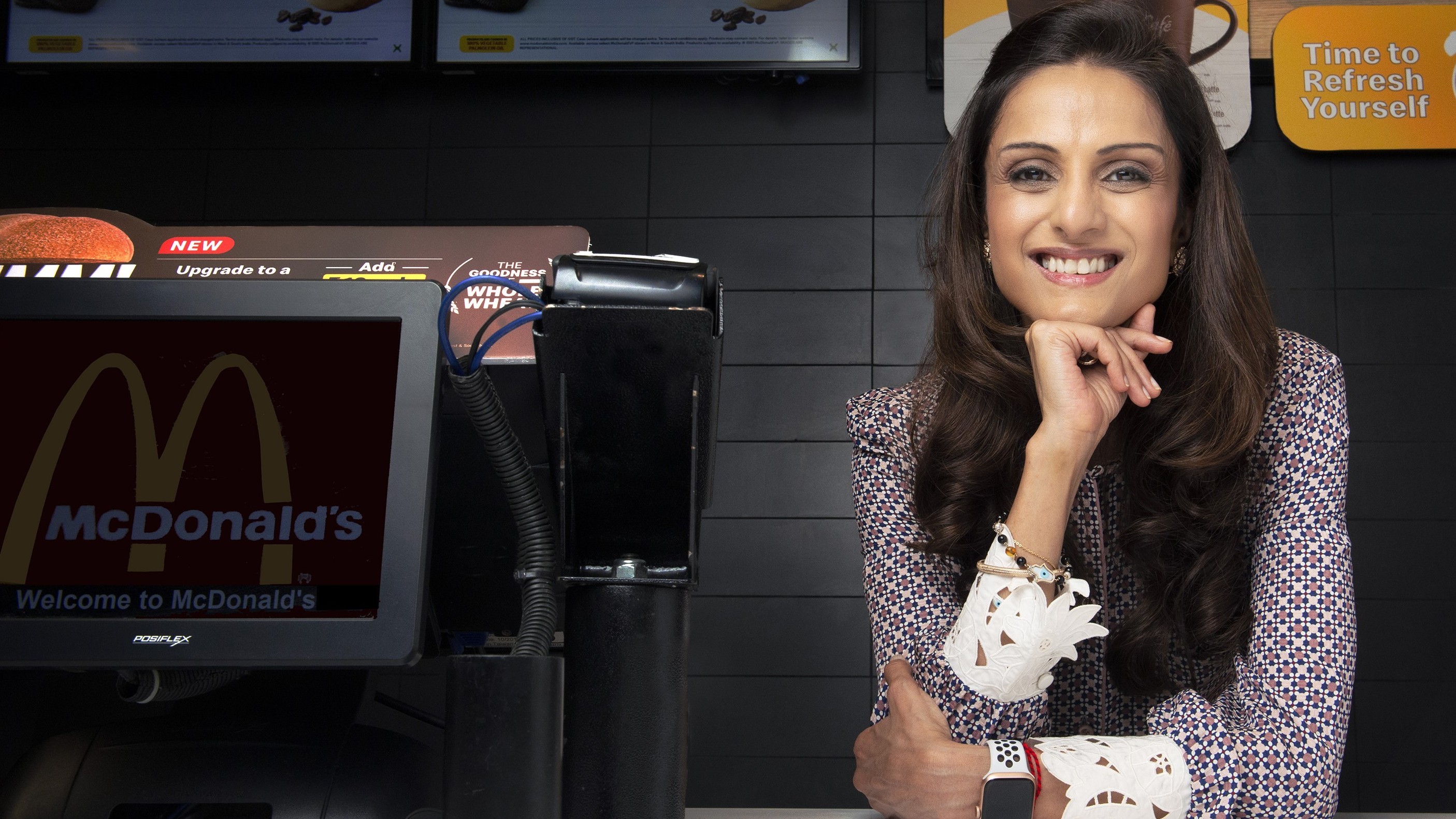 Ms Smita Jatia comes with two decades of experience in the QSR industry. She has been an active member of the McDonald’s India team since the commencement of its operations and over the years, has handled various roles within the organization. Ms Jatia is responsible for charting out and leading the aggressive growth of McDonald’s India operations across West and South India. She has been instrumental in launching, indigenizing and building the McDonald’s brand over the last 18 years. She joined Hardcastle Restaurants Pvt. Ltd as Director, Marketing, in 1996 and was the Chief Operating Officer for Hardcastle Restaurants Pvt. Ltd.
She currently performs the role of Managing Director, Hardcastle Restaurants. A commerce graduate from Sydenham College, Mumbai, Ms Jatia has also completed an 18- week executive management program from Harvard Business School, Boston, and has undergone a rigorous Marketing and Restaurant Leadership program at the Hamburger University, USA.
Read More 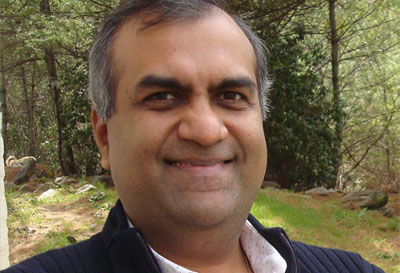 Mr. Manish Chokhani is one of India’s most respected investors and financial experts. He is an Advisor to Axis Bank and holds Board positions in various companies including Axis Capital, Enam Holdings, Zee Entertainment Enterprises, Shopper’s Stop and Westlife Development. He has had a brilliant career, graduating as among the youngest MBAs from the London Business School soon after obtaining his CA certification. He went on to become MD & CEO of Enam Securities and led its US$ 300 million merger with Axis Bank to create Axis Capital Ltd (ACL) one of India’s leading investment banks.
Mr. Chokhani had co-founded Enam AMC that manages the wealth of some of India’s leading business families. He also served as a Director of the US$ 1 billion ZA Capital Fund and Advisor to the US$ 400 mn India Capital Fund. Mr. Chokhani has served three terms as Co- Chairman of the Capital Markets Committee at the Indian Merchants Chamber. He is currently a member of SEBI’s Alternative Investment Promotion Advisory Committee. He is an active member of the Young Presidents Organisation and a Fellow of the AIMA. He has served on the International Alumni Board as well as scholarship panels of the London Business School. He has also been a visiting faculty member at the IIM Kolkata and has delivered talks at various other business schools.
Read More 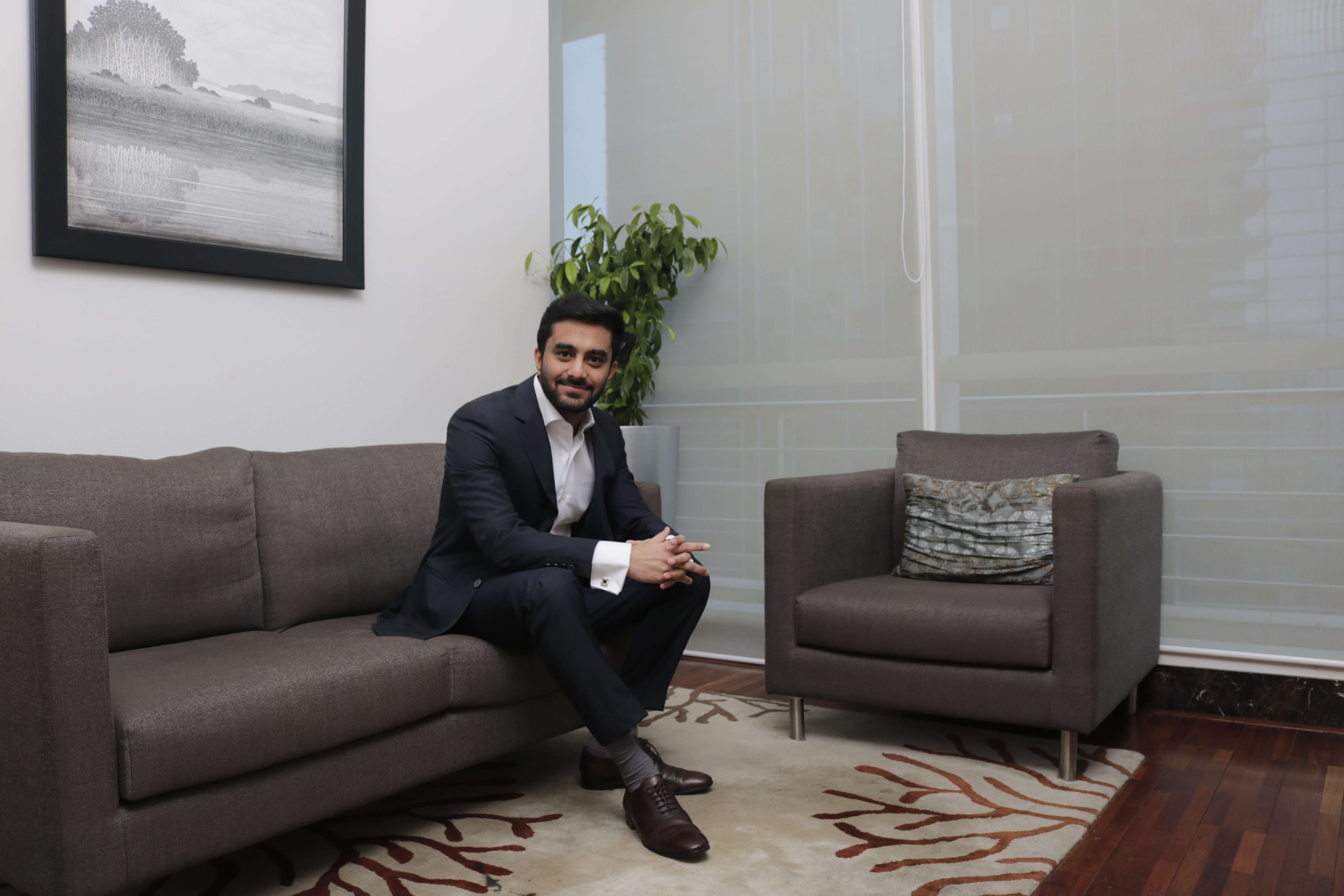 Mr. Akshay Jatia is the Chief Strategy Officer at McDonald’s India (West and South) leading Business Strategy, Consumer Technology and Innovation for the company. He leads the overall business strategy to build McDonald’s as the eating destination of choice across platforms in West and South India Akshay joined McDonald’s India in 2015 and has worked cross-functionally to understand the nuances of strategy, operations, marketing, IT and synergized them to grow the brand and has successfully led many business critical projects.
Akshay’s McDonald’s journey started at the restaurants where he spent close to a year training as a crew. Over the course of this one year, Akshay worked at the front counter, in the kitchen and managed the restaurant lobby while working both day and night shifts. Post a rigorous restaurant training, Akshay took on the role of General Manager – Business Extensions and played a key role in growing and consolidating the company’s brand extensions - McDelivery, McCafé and McBreakfast. Akshay also led the launch of the digital delivery business for McDonald’s, in early 2015, when the Online Home Delivery Market in India was almost non-existent. A digital native himself, Akshay believed that the future of delivery business lied in technology and digital innovation and he led the technology revolution at HRPL. In addition to setting up the owned delivery platform, Akshay also spearheaded the efforts to forge strategic alliances with third party delivery aggregators to expand McDonald’s delivery footprint. As a result the revenues from delivery jumped 12x in the last six years. During the pandemic, while McDelivery ensured business continuity, Akshay also led the launch of an innovative new channel – On-The-Go, that enabled customers to order food on the McDelivery app and collect it from a pre-designated spot close to the restaurant. This new format became a key growth driver during the lockdown and grew 3 times in 3 quarters, bringing new customers to the brand fold. Another success story for Akshay has been the new McDonald’s app - a unique offer engine that uses technology to decipher customer preferences and creates personalised offers for them. The app was launched in January 2019 and has over 3.5 million downloads today, contributing healthily towards Guest Counts and frequency. Akshay’s vision is to transform McDonald’s into a brand that is equal parts food and technology. He holds a Bachelor of Science degree with majors in Finance and International Business from Leonard N. Stern School of Business, New York University.
Read More 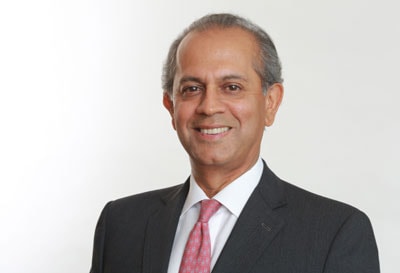 Mr. Tarun Kataria runs a corporate finance advisory and private equity practice. Previously he was CEO, India of Religare Capital Markets, a regional investment banking and institutional equities business. From 2007 to 2010, Mr. Kataria was Chief Executive, Global Banking & Markets, HSBC India, Vice Chairman, HSBC Securities and Capital Markets Ltd and Non-Executive Director of HSBC InvestDirect (India) Ltd, a listed NBFC and retail brokerage business. Prior to his stay in India, Mr. Kataria was Managing Director and Head of Institutional Sales, Asia Pacific, with HSBC based in Hong Kong. Mr. Kataria is currently independent Director of Mapletree Logistics Trust Ltd,
an SGX listed REIT and Westlife Development Ltd. In a career spanning the US, Asia and India, Mr. Kataria has worked in the US with Merrill Lynch’s Investment Banking Division and Chase Manhattan Bank’s Derivatives Group. He moved to Asia in 1995 as Head of Derivatives, Southeast Asia for Chase Manhattan Bank based in Singapore. He joined HSBC in 1998 as Head of Derivatives, Southeast Asia, and later was appointed Head of Sales, Singapore, HSBC Global Markets. Mr. Kataria has an MBA in Finance, 1985, from The Wharton School of the University of Pennsylvania. His primary education was at The Cathedral and John Connon School, Bombay, and the Sydenham College of Commerce and Economics, Bombay. He is a Chartered Accountant. He is a Paul Harris Fellow of Rotary International and his interests include Indian art, golf, yoga and African safaris with his family. His charitable contributions are directed at educating women and girl children.
Read More